I am happy that you are using this web site and hope that you found it useful. Unfortunately, the cost of making this material freely available is increasing, so if you have found the site useful and would like to contribute towards its continuation, I would greatly appreciate it. Click the button to go to Paypal and make a donation.

After the end of the French Wars, it became increasingly clear that England was suffering from great social, economic and political upheavals. These problems collectively became known as the 'Condition of England Question'. Many of these problems would have occurred eventually but had been speeded up by the effects of the French Wars on the country. Most of the major changes were the direct result of the French Wars. Others came from natural growth and change. The distress and discontent caused by these enormous changes were manifested in a series of events in the period 1811-19. As a result of these occurrences, the government passed the Six Acts in 1819: the apparent harshness seemed justified with the events of 1820.

A group of radicals calling themselves the Spencean Philanthropists after Thomas Spence had been involved with such episodes as the Spa Fields riots in 1816. Their beliefs were a strange mixture of radical socialism and violent republicanism; the sanity of some of them may be questioned. One of the main players at both Spa Fields and in the Cato Street Conspiracy was Arthur Thistlewood.

Whether the Spencean Philanthropists had really intended an insurrection in 1817 is debatable; however, the small group that continued to meet after then did turn its thoughts to violence and agents provocateurs were still part of it. Under the influence of these spies, Thistlewood and his comrades cooked up the plot known as the Cato Street Conspiracy early in 1820. Their plan was to overthrow the government and set up a Committee of Public Safety which would supervise a radical revolution.

On 29 January 1820, George III died; this precipitated a constitutional crisis and the calling of a general election. George Edwards, one of the Spenceans, suggested that the group should seize the opportunity to kill the entire cabinet during this time of crisis. An advertisement in the newspapers announced that a 'grand Cabinet dinner' was to be held at the home of the Lord President of the Council (Lord Harrowby) in Grosvenor Square. This provided an ideal location for the conspirators to do their work. Thistlewood set out the plan as follows:

I propose going to the door with a note to present to Earl Harrowby; when the door is opened, the men will rush in directly, seize the servants that are in the way, present a pistol to them, and directly threaten them with death, if they offer the least resistance or noise. This done, a party will rush forward to take command of the stairs. One man is to have fire arms and he will be protected by another holding a hand grenade; a couple of men will take the head of the stairs leading to the lower part of the house. If any servants attempt to make a retreat these men with the hand grenades are to clap fire to them, and fling them in amongst them. All these objects are for the securing of the house and those men who are to go in for the assassination are to rush in directly after.

James Ings announced that he would enter the room first, armed with a pair of pistols, a cutlass and knife. He intended to behead every member of the Cabinet and to remove the heads of Castlereagh and Sidmouth in bags, so the heads could be displayed on pikes on Westminster Bridge.

Unfortunately, Edwards was a government spy; he was responsible for the advertisement in the New Times with the full knowledge of Lord Liverpool's government. When the conspirators met for the last time prior to carrying out the plan, they were arrested. Thistlewood stabbed and killed one of the Bow Street Runners; the conspirators were put on trial, during which the Attorney-General said

It was thought by Englishmen, that the assassination of all His Majesty's ministers would be a proper commencement of the revolution which they wished to bring about... Having effected that, they intended to set fire to various parts of this metropolis, to endeavour to obtain possession of the cannon at the artillery ground, and at the stable of the City Light Horse Volunteers, I believe in Grays-inn-lane - to create as much confusion and dismay as they could by these various operations, and then to establish, what in their various expectations they had imagined themselves capable of erecting, a provisional government, the seat of which was to be at the Mansion House. (State Trials, vol.33 Col. 719)

The defence counsel's response was one of incredulity:

I have looked ... to the list of witnesses for the Crown, I find the name of one Edwards ... not a prisoner - not taken up upon this charge - not tainted as an accomplice by government - no treason that we have known of against him - a man cognizant of all the facts - a man present at all the conversations - a man who pointed out the New Times newspaper, and saw and knew and guided everything, and yet that man is not called - the spy is not called because the contrivance would have been made evident by his cross-examination... If all the circumstances could be investigated, it would prove that the treasonable part is altogether the brewing of a spy and an informer, to implicate in a charge of high treason, a man who had gone far enough towards losing his own life, but not to the length of that greatest of crimes. (State Trials, vol.33 cols. 864, 889)

Thistlewood, Ings, Brunt, Tidd and Davidson were executed on 1 May 1820; five others were transported. The government used the incident to justify the Six Acts, passed in 1819. 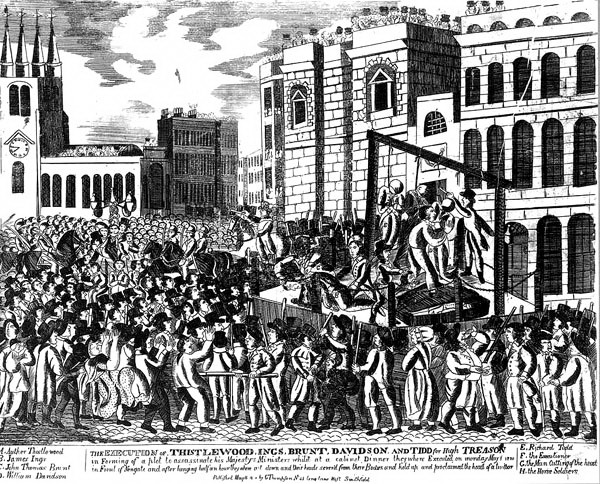 The Cato Street Conspiracy was the last major attempt at insurrection in the post-war period.